June is here and so are the beginning of a multitude of blooms. This flower is of the Hibiscus family of plants. I posted a couple views of this plant on Mother’s Day, but couldn’t resist this image shot with my new Samsung S10…amazing clarity without any alteration.

As I study the intricacies of this one flower, I am in awe of its magnificence. No wonder Monet and many others painted so many flowers. They are inspiring to behold! God certainly is the Master at creating the sublime.

May your Summer be full of fascinating moments and beautiful surprises ! 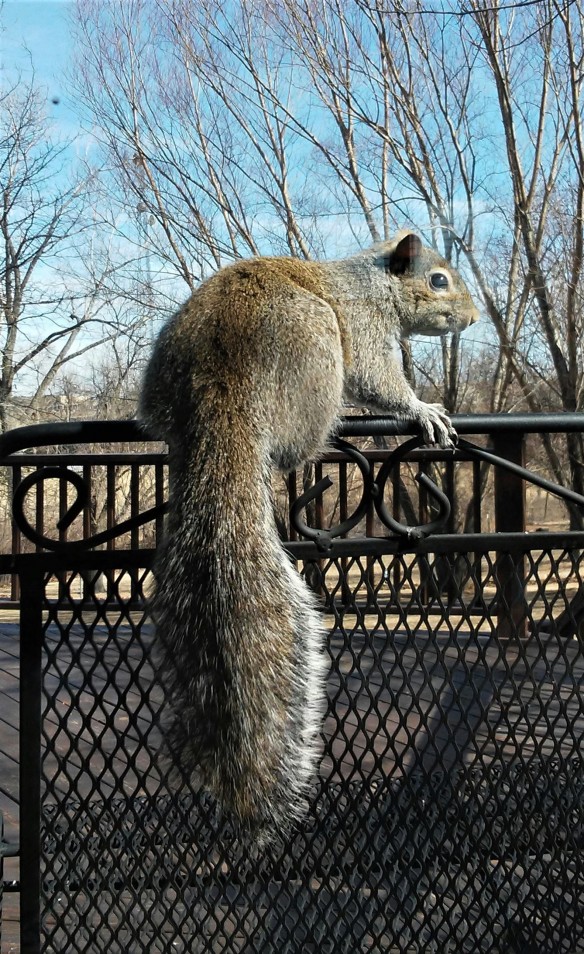 If squirrels had their own social media this gal would rate highly. Just look at that flamboyant tail-you won’t see many that bushy or multi-colored. And, that pose, viewed from the rear which has become so popular. Then there is that coy expression with a sideways glance as if to say, “What do you have that I don’t have?”. Let’s not forget her marbled eye, cute twitchy nose and tiny whiskers. All of this beauty while balancing steadily on a slider chair with a nonchalant grip on the iron bar. I’m surprised she didn’t take a selfie!

Seriously, this is my last photograph of a squirrel for quite some time, but I couldn’t resist such a beckoning subject. After taking a jet tour through various social media sites recently, I was reminded how much this rodent has in common with humans, social media and self-publication. I mean, how many images can one take of eating out or hugging friends; enjoying a cocktail or describing what makeup to use; vacation photos about how many places one has seen in a day, a week, a month or a year; digitized faces and places which we try so desperately to convince others that are as real as they appear. Egos get stroked and reality choked.

I’m not against sharing good looks, fun moments, fantastic locations, unusual food or exotic experiences. It’s just that we share the ‘fantastic’ so often that our images and texts all tend to blend together into one big melting pot of the same extraordinary. Where are the mundane photos such as of a motorist double-parked because he or she was late to an appointment or a couple hand picking fruit while at the grocery store? How about  kids tossing rocks in a stream or dogs simply laying around doing nothing but panting? Corporate meetings where half the attendees are falling asleep or mimes losing their balance while acting on street corners in NYC?

Ordinary doesn’t sell…not on television, in videos, on social media outlets, in magazines or even within our government. And, certainly not through our ‘smart’ phones or tablets where we post and view so much of this extraordinary content. Sensationalism is all the rage and Americans lead the parade. Perhaps my optical lenses need to be cleaned so I can see Americana without the bias. And, hopefully, my perspective will change along with clarity. I really do want to be a part of the sublime-especially when framed within the daily routines of life.

I wish I could take credit for the title and idea, but that honor goes to my pastor Nathan Miller who preached a superb message about losing the wonder, the awe about God as we age. For those who are interested, he referenced Mathew 13: 53-58   which is a short excerpt in the Bible where Jesus is preaching in his hometown. All who heard marveled at Jesus’ command of scripture, but they rejected him because he grew up among them and was familiar to them, therefore not accepting his message or ministry. In the end, Jesus said that a prophet is not honored in his home town. Of course, he was much more than a prophet which increased their rejection of the message, and ultimately him. I felt a tinge of remorse as I realized I often regard Christ through too familiar eyes.

Please hang with me as I share some thoughts about life using this theme. As much as this message applied to people’s relationship to God, it also applies to so many other critical aspects about our daily lives. Wonder can be defined as “a feeling of surprise mingled with  admiration, caused by something beautiful, unexpected, unfamiliar or inexplicable“. The photos I will be sharing are of Elliot, my grandson, who is full of wonder. These images are cell phone shots taken impromptu, but I believe they get the point across as you watch Elliot in fullness of wonder. And yes, I don’t mind sharing him with you!

It has been said that familiarity breeds contempt. I know that is harsh and not always the case, but there is a ring of truth to this statement. Familiarity also results in boredom and a withdrawal from what we once cherished. This is probably the most common result and occurs over time. It is seldom intentional. In fact, we don’t usually know we have reached this stage until we are either confronted by someone who remarks about our adjusted position about something or someone, or we have an epiphany of sorts and realize that what used to excite and engage us does so no longer. However, there is hope!

Wonder is a beautiful thing! Whether we are experiencing something for the fist time or the hundredth, when we capture the essence of what it is that thrills us we become filled with awe and joy. The key in keeping ourselves from falling out of this mindset is rather simple, yet in reality so difficult to maintain.

To view life through the eyes of a child is one such key to maintaining wonder for the sublime which surrounds us each day. I am not speaking of what some consider to be a foolish Pollyanna who blindly sees life through rose colored glasses. I am speaking of the Pollyanna who believes that good things will happen rather than bad, and remains optimistic even during adversity. To wake up each day with the expectation to simply enjoy each encounter and experience is a good start. Elliot is quite adept at this. I didn’t say perfect, though!

Ah, but there is a battle raging all around us, as well as inside of us. There are so many enemies which seek to rob us of our joy and the wonder of life which God has so graciously given us. We fight pain and fatigue, money worries and relationship hassles, poor health and fear of death. Negativity and chaos bombards us from every outlet possible: social media, politics, war news, seeing poor sportsmanship, experiencing greed and corruption, and on and on. It seems for every positive there are three negatives. However, that is not reality, but what we are lead to believe is our reality. We must change our perspective and rise above the debris which has caused us to become bored and afraid. Circumstances may not change, but our mind and hearts can.

We must strive to rid ourselves of cynicism, malice, bigotry, inflated egos, fear, exaggerated regrets, unrealistic expectations, and all that is unhealthy to our souls (it’s not the same for all of us-only you know what stirs your soul). Perspective is borne from hope and appreciation for what is rather than what we want. There is nothing wrong with desiring more or better things in our lives as long as we are balanced in seeking such. Wonder is not easy to maintain because life can be cruel and very hard at times. But, anything worthwhile takes effort. Personally, I want to expend my efforts as Elliot does. I want to train my mind to view each day as a gift just waiting to be opened! Yes, I am an adult and have adult responsibilities which I take seriously, but that shouldn’t prevent me from having the heart of a child. Jesus said, “Let the little children come to me, and do not hinder them, for the kingdom of heaven belongs to such as these“.