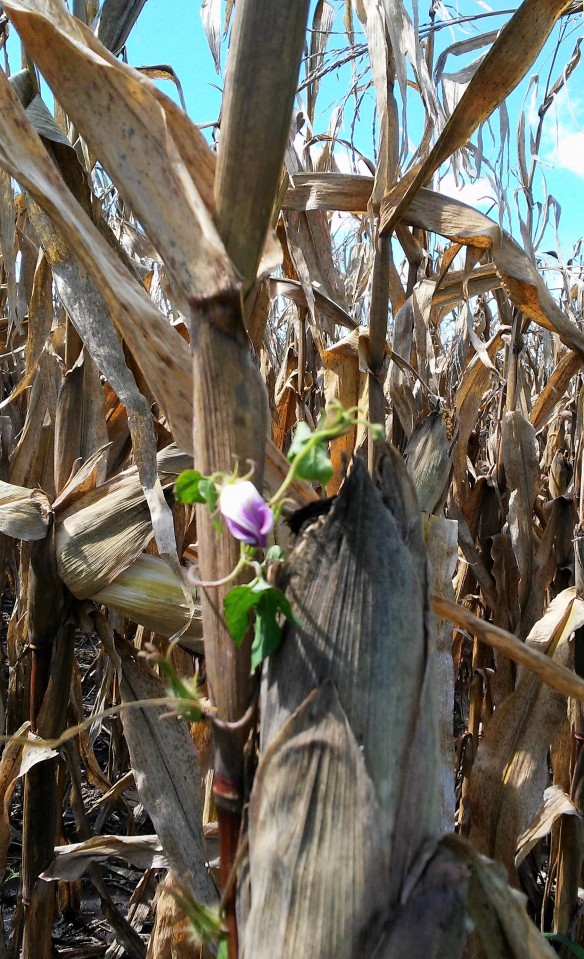 Among the dried stocks with ears of hardened feed corn climbs a lone Morning Glory vine with a single flower ready to bloom.

The living among the dead. A splash of color against the drabness of the crunchy husks.

The good earth and just enough rain to produce new life while the planted crop ceases to grow further.

The cycle of planting, growing and reaping will repeat itself only if the farmer performs his job of sowing every year. The growth is up to nature’s benevolence.

And, yet, as I gaze upon this Morning Glory inching its way up the stalk, there was no planting by man; this occurs only by nature as God has ordained.

Perhaps this vibrant flower and dying corn reveal the paradox we call life. From cradle to grave life is lived, and the cycle repeats.

When we thrive during the time allotted to each of us, bringing color into other’s lives, we  all benefit abundantly. 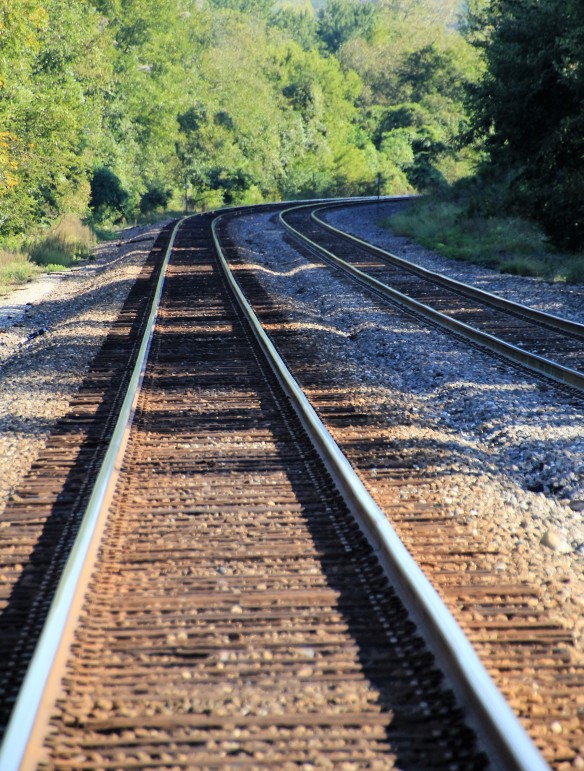 There have been songs, poems and stories written about train travel and railroads since they became a viable mode of transporting freight and people across fast stretches of land throughout the world. Some of the most breathtaking scenery can be viewed from the rails. I have fond memories of trains since I used to be a locomotive engineer in my previous life. So, I caught myself singing this 1972 Arlo Guthrie hit that I would like to share  with you. If you so desire, I recommend listening to him sing it, as it is very pleasant. It was composed by Steve Goodman, a singer-songwriter in 1970 as he and his wife were riding this train to visit her grandmother, and she fell asleep. Steve witnessed all he wrote about. He produced eleven albums before he died at the age of 36 from leukemia. His songs were recorded by many famous musicians, and in 1984 Steve was posthumously awarded the Best Country song when Willie Nelson made it a #1 hit in 1984. Arlo Guthrie was also a prolific singer-songwriter, but he didn’t write this one. Arlo’s father was the legendary folk singer, Woody Guthrie.

Riding on the City of New Orleans, Illinois Central Monday morning rail. Fifteen cars and fifteen restless riders, three conductors and twenty-five sacks of mail. All along the southbound odyssey, the train pulls out of Kankakee-rolls along pasts houses, farms and fields. Passin’ trains that have no names, freight yards full of old black men, and the graveyards of the rusted automobiles.

Good morning America, how are you? Don’t you know me I’m your native son? I’m the train they call The City of New Orleans; I’ll be gone five hundred miles when the day is done.

Dealin’ card games with the old man in the Club Car, penny a point-ain’t no one keepin’ score. Pass the paper bag that holds the bottle-feel the wheels rumblin’ ‘neath the floor. And the sons of Pullman Porters and the sons of Engineers, ride their father’s magic carpets made of steel. And mothers with their babies asleep are rockin’ to the gentle beat, and the rhythm of the rails is all they feel.

Good morning America, how are you? Don’t you know me, I’m you native son? I’m the train they call The City of New Orleans; I’ll be gone five hundred miles when the day is done.

Nighttime on The City of New Orleans, changing cars in Memphis, Tennessee. Half way home, we’ll be there by morning, through the Mississippi darkness rolling down to the sea. And all the towns and people seem to fade into a bad dream; and the steel rails still ain’t heard the news. The conductor sings his song again, the passengers will please refrain; this train’s got the disappearing railroad blues.

Good night America, how are you? Don’t you know me, I’m your native son?

I’m the train they call The City of New Orleans; I’ll be gone five hundred miles when the day is done.

Funny thing, dad is one of few words when spelled backwards is still spelled the same. One can invert the word: start it from back to front or down to up and vice versa. Not sure why I started this post that way, except to lighten how I feel.

Dad, we miss you; your daughter and I. Cheryl, too. You left us too long ago…so, so long ago. Yet, our memories of you are alive and your blood pulses in our veins. We bare your name, and your imprint is stamped on our hearts acknowledging we are your possession.

Valerie reminded me that today commemorates the anniversary of your passing. Your grandchildren were so little then. How you loved them. And, how they would have benefitted from your presence in their lives for years to come. But, that was not to be.

We were fortunate, though. Too many don’t know their dads or are mistreated by them. Fond memories for these are far and few between-if ever. So, in that respect, we are rich to have know such a grand gentleman as yourself. Perfect-far from it, but we can take solace in that we bare the same imperfections as you. We also carry within us some of the more grand characteristics of lives lived with a sense of integrity.

To dwell on the sorrow is okay for a moment, but our lives move on. Everyone knows this truth, but it is sometimes difficult to accept. So, I conclude this more serious than usual post by simply saying this. I honestly hope that when it is my time to vacate this mortal body, my loved ones will know the same love I have for them as you gave to us. 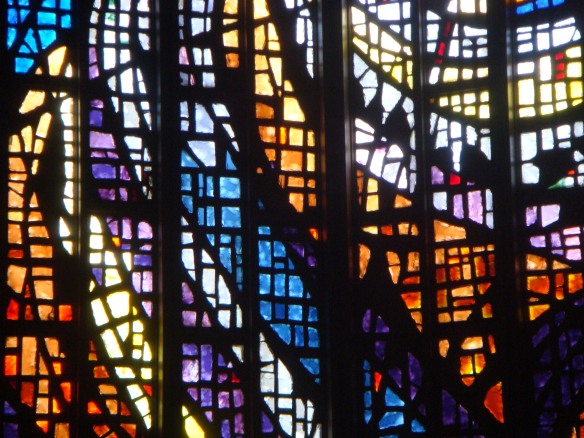 Stained glass from the chapel where dad’s last tribute was made by his family & many friends. 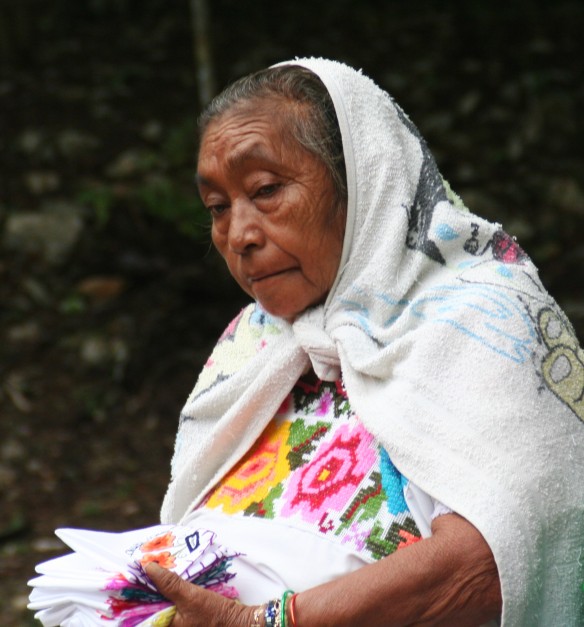 Several years ago we visited an ancient Mayan complex in the Yucatan jungle of Mexico called Chichen Itza. I wanted to visit this site since I was a small boy. I finally did as a man, although the boy is still in me. We visited the pyramids, the planetarium, the sports arena, and miscellaneous other structures. I regret that I didn’t purchase the handful of small towels that grandma was holding. I knew they were inexpensive and she probably could have used the money, plus it would have given her the satisfaction of selling her wares. 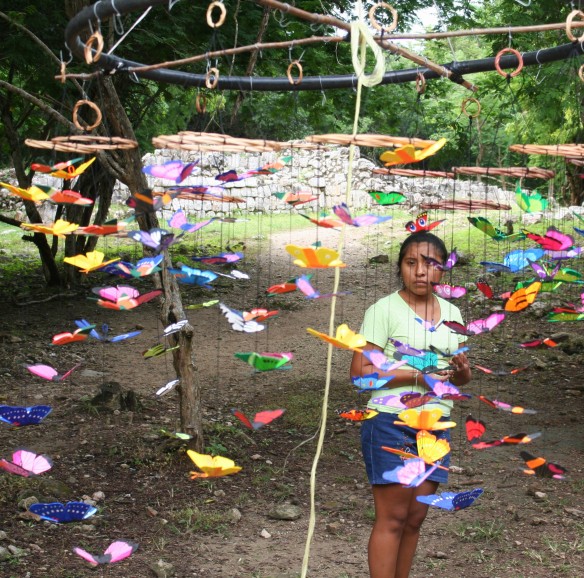 In addition, we viewed many types of colorful clothing, beautiful pottery and assorted trinkets-all made by the local Mayan people. As I revisited some photographs, the people stood out as much as the ancient structures we witnessed on that overcast day. I began to recognize the faces I viewed were direct ancestors of the people who created these magnificent and sophisticated complexes. Along with their keen astronomical abilities, their advanced farming techniques, along with the death rituals made to their Gods, this civilization almost vanished. However, the Mayan people and their culture still exist, but without those gruesome rituals! 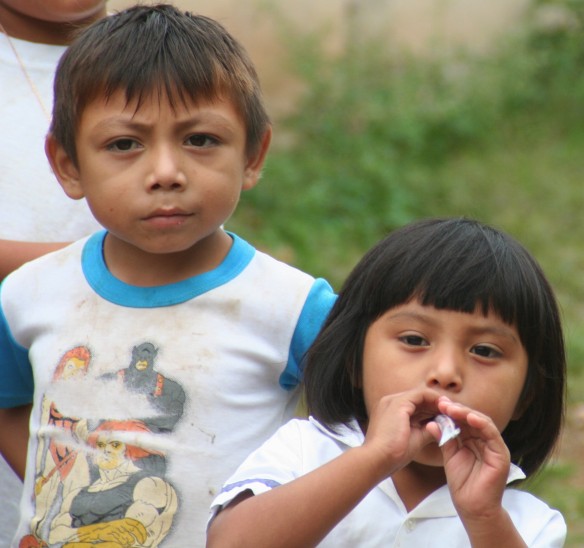 From the old to the young, a story lies within each person’s heart and is displayed upon their face. What will these children’s stories be like as they grow old? Only God truly knows. Have you ever thought about your own story? If you are reading this and don’t like it, there is still time to change course and alter your story so it has a better ending. I wish you well. 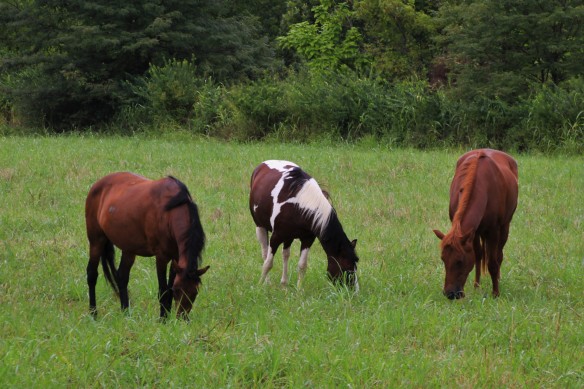 Something about seeing horses as I drive past them really attracts my attention.  In some ways I am fortunate to live in a part of a city which still has outlying swaths of land that have not been swallowed up by developers. These healthy horses are a testament to animals adapting to the sprawl of suburbia, yet still enjoy the fruits of the good earth. I sincerely hope you have such a blessing around you. Whether living in an urban jungle or enveloped in total solitude, one can find beauty amongst the environment. However, one must have eyes wide open to see, and a heart to appreciate. I am most fortunate, indeed.