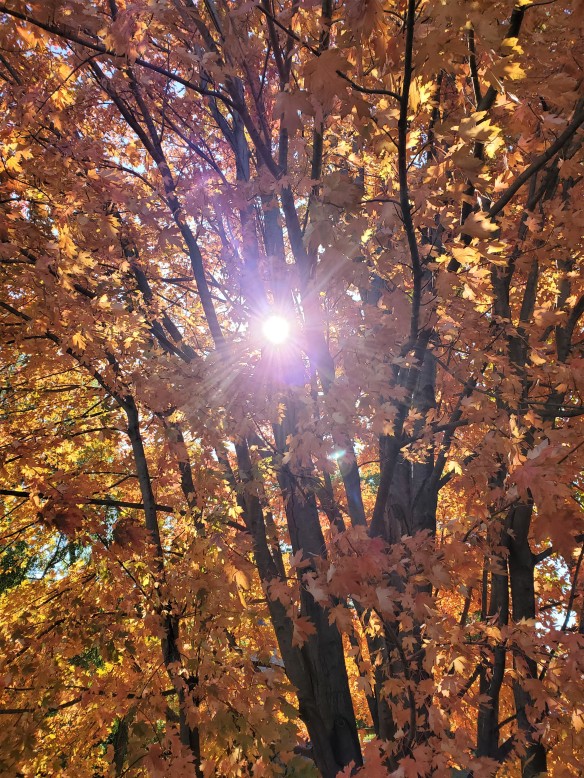 Like a projectile moving at quantum speed it enters your eye. Before you blink or squint your optic nerve has been blasted by this thing we call “light”. Like a dart hitting the bulls eye this light has hit its target and temporarily blinds you.

I thought this morning what’s the point of this post? Play on words intended. I realized I didn’t know what the point is. I just liked the photograph. Is that a good enough reason to post something…because you like it? Maybe.

Certainly, this image tells us several things worth noting. Sunlight can be extremely intense. Autumn has arrived as the leaves of our maple tree can attest to by their change in color, and dropping to the ground in droves. I like trees and nature. I enjoy color. I like to see the unusual and snap it with my camera-even if no one else sees the result.

Fall is such a wonderful time of year. Nature displays her beauty in unique and vibrant ways. The warmth of summer begins to change to the cold of winter. The days are shorter. School is in full swing. Football is halfway through its season while baseball is winding down via the World Series. Hunting season starts. Wardrobes change. Even food choices change.

Perhaps the point of this post is simply to express myself. You should do the same as it is rather fun ! 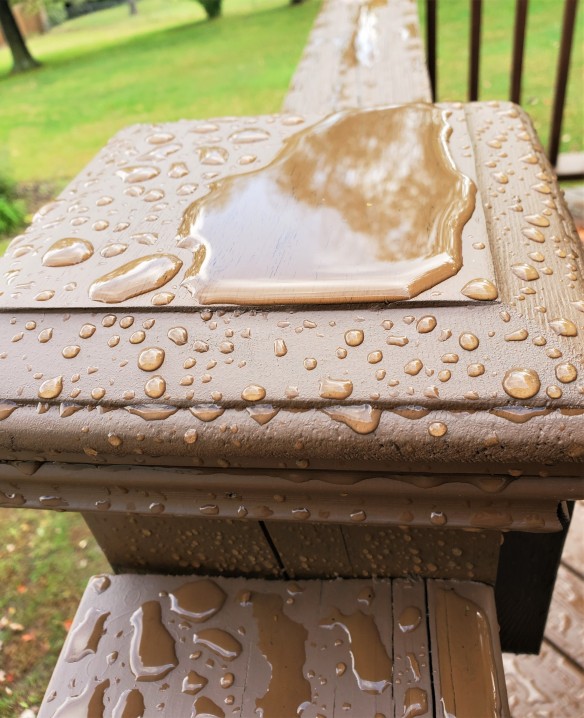 Molecular surface tension creates the astounding effect of water literally holding its shape on a myriad of surfaces. Due to this dynamic, water globs can even be rolled around on certain materials, making for an enjoyable exercise and sight.

I recently stained and sealed my deck so the coated wood boards and caps had just the right characteristics to create a vibrant scene of sorts. What strikes me is the seemingly simplicity of the water droplets standing on wood, all-the-while the science behind this occurrence is rather complicated.

When I contemplate that all the water which exists in our world will never increase nor decrease I stand amazed at its resiliency to return to the form we know most: liquid. Water can take on the form of ice upon freezing or steam after boiling. It can be found flowing rapidly down a mountain stream or slowly moving along the path of an old river. It can become a torrent of waves during a severe storm and jetted through a fire hose or sprinkler head. Water can be found on a placid lake or in a family pool. It can even cut steel.

Some parts of the world receive less than a cup of water a year while other areas receive so much rain that it can’t be accurately measured. Finally, consider the amount of water which makes up a large part of our bodies, and the bodies of most of God’s creatures. Humans can’t last even two weeks without in-taking water. A rather valuable resource, don’t you think? We sure could use more cohesion among the human population !