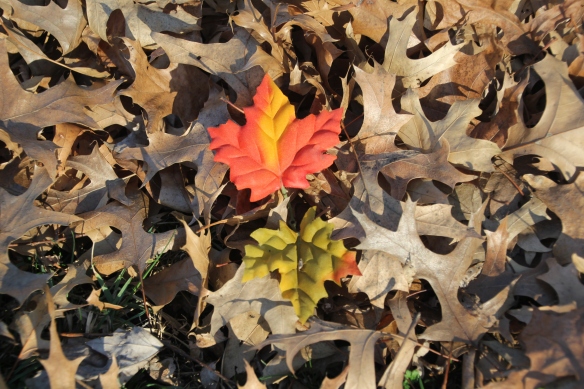 These colorful maple leaves contrast sharply from the dull oak leaves of winter. Hence, the reason I noticed them in the first place as I walked around my yard. Rather obvious, isn’t it? Plastic leaves of a different species among a dull background of another species of tree. However, the humble brag is just the opposite as it can be disguised in so many ways that it can be barely discernible.

There are many things to brag about: a child, an accomplishment, a reward, a performance, even a duty. Some folks are simply quite open about their accomplishments and will tell you so. Although annoying at times, at least you know where they stand with respect to their passions. The humble braggers are so much more subtle. They can weave accomplishments into a conversation like a quilter weaves threads. Before you realize it, you have been converted to their greatness and level of prestige.

Whether a sports figure, a business owner, a chef, a parent or any occupation, one can interject how well they have done in their given field of influence. I am being vague for a reason because I don’t want to insult anyone, but I know quite a few of them. I recently witnessed several more during a sports interview of professional players. The key words are “I” and “me” and “my”. These indicate a tilt towards the brag. Some folks are even more subtle and use comparisons, statistics, and false humility to get the brag to be effective.

Why this topic in the first place? I don’t really know, except it came to mind when I saw the fake leaves and have heard many a humble brag recently. In all honesty, I can’t state that I am not guilty of this misdemeanor, but I strive to be humble. How about you? Can you relate? Even as I write this, I ask myself am I bragging because I point out other’s faults? I know this: I am accountable for what I say and do to the following: God, myself, my wife!, everyone else. I have an obligation to be humble, yet strong. Actions speak louder than words, as the old axiom goes. A little bit of self reflection helps, as well.

One moment they stand as sentinels over the landscape and then they disappear, only to reveal themselves anew. Wind farms hidden by fog and juxtaposed against a backdrop of petroleum derelicts pumping crude oil into tanks. Fascinating harmony.

As we attempt to ween ourselves from fossil fuels, evidence abounds that this is actually occurring. Our electric utility company puts out an info letter with each bill. This last one stated that over 35% of our energy is now derived from wind and solar. Progress is being made, however, it will still take decades before total energy production comes from non-fossil fuel sources. America is behind other nations in this department, but we are also much larger then those nations going 100% non-oil.

This gives me mixed emotions. I know the need to clean the air we breath and all the ramifications that are attached to this statement, but I also recall it was oil that helped propel the industrial revolution and has been the energy source which produced almost everything that exists from a man-made perspective.

I will miss the reciprocating engine which powered the first automobiles, then the turbine which allowed air transportation to be a viable source available to most everyone. From trans-Atlantic ocean liners to narrow-gauge railroads to everyday transportation, petroleum has played a huge part in man’s lives and the advancement of most cultures. Hybrid cars are becoming more abundant and pure electric cars will one day be the norm. Coal for power plants vs nuclear energy is still a big issue among many countries.

Iceland is the only country I know of where modern mechanized life exists without petroleum. This island has lots of water, geo-thermal energy, and wind to harvest, and the Icelanders have put all of it to good use. Perhaps there are more to do so?

Before I ramble on further, please thank God for fossil fuels and man’s ingenuity to substitute other energy sources for them. When you turn the key in your gas or diesel powered vehicle, ride a bus, or fly across vast distances, please remember that it is petroleum that is taking you there.

As I recently viewed the landscape from Kansas to Texas and back I saw change. Best get used to it for it is a good thing…even with mixed feelings. BTW, I will miss drag racing!

In the animated film named Toy Story, Woody is a wooden cowboy toy with a pull cord. When you pull his cord there are recorded sayings such as, “There’s a snake in my boot” and “Reach for the sky”. It is this saying that I choose to elaborate on just a little bit.

I took this photograph horizontally to show the breadth of the fabulous sky that day. However, if it were viewed vertically, it would reveal more for this post. Oh well… the view was beautiful anyway I looked at it.

The utility pole stretches beyond the limits of vision, as does life. So, maybe this is the best way to display this image!

We try really hard to map out our future, to see what life will be like in one, ten, twenty years from now. Occasionally things work out as we planned, but not usually. And for those who walk the line they mapped out, I guarantee there are many bumps and bruises along the way. Life is like that for all of us.

Some seek crystal balls to foretell the future. Others simply don’t care as long as their specific needs are met at the specific time. Somewhere in the middle is where most of us find ourselves. We wonder what the future will hold while dealing with the needs of today and tomorrow. Life can be tough. Life can also be amazingly wonderful.

There is a season for everything under the sun, as King Solomon stated in his synopsis of living. Although he was the wisest and richest person that ever lived, he still had questions about this thing we call ‘our lives’. Wealth nor poverty, location nor altitude can provide us with enough information to satisfy the mind of man. Only God can give us peace of mind, and then that takes effort on our part.

I dare you to “Reach for the Sky” and explore the unknown. Seek those things you fear may harm you. Become excited about life again! Too many of us have fallen asleep and simply plod along without expanding our minds or souls. I personally know this and it is not a pleasant place to be. Stretch yourselves and reach for whatever lures you to explore. Just be mindful of the consequences because not all exploring is healthy.

It’s hard not to smile when you see this photograph, is it? This is Elliot when he was two years old and was fascinated by water and electricity…not the best combination unless one wants to become a hydro-electric engineer! He is smart enough to be that.

Winter here has been bitter cold for our region with intermittent sleet and snow mixed in. Most everyone I talk to says they can’t wait for Summer. Elliot and Audrie, his younger sister, enjoy each season.  Bitter cold winters must be a getting-older-dynamic! Although, having mom and dad layer on the clothes and pull out the sleds is a plus for them. Us more mature folks have no such luxury.

P.S. I know that other parts of our country have been much harder hit with snow and blizzards and zero degree temps. We don’t whine here in the Midwest, just state the facts.

Hope you enjoy the photograph and the joy Elliot felt at the time…as did Cheryl and myself. Looking forward to not only warmer weather, but more joyful times!