Creativity is an odd thing…some possess loads of it while others have it within them, but can’t seem to squeeze it out all that often. In my case, the desire is there, yet the enthusiasm wavers a bit. Hence, not much creativity being published.

I like quotes, quips and prose. I read a lot…not a big deal. What do I gain? The more important question is, “What do I contribute?”.  Oh, I love a wonderful photograph and painting ! Great sculptures also capture my heart. 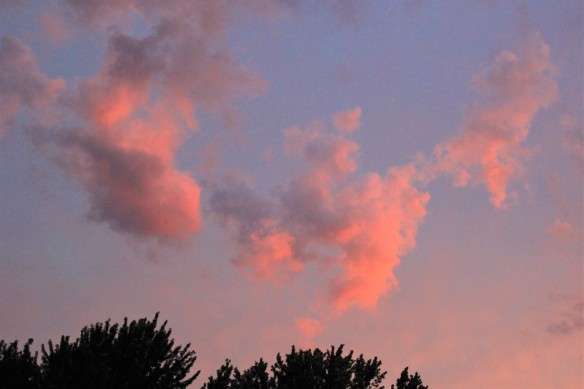 I woke up early this morning before the sunrise, but as I saw the illumination upon my dining room wall, I quickly grabbed my Canon and took this image. The sky was changed within seconds. Literally.

Mediocre photograph…which may equate to mediocrity. What do you think ? I wonder ?

I like it because it reflects the ever-changing gift of God’s creation. Please take a moment and study the makeup of the clouds…the odd color and shapes…the background…the tree tops which just emerged from winter’s grasp.

Mediocrity. I am not sure I know the meaning of this word. However, I like this photograph because it reflects a peacefulness about it. I hope you like it, too. 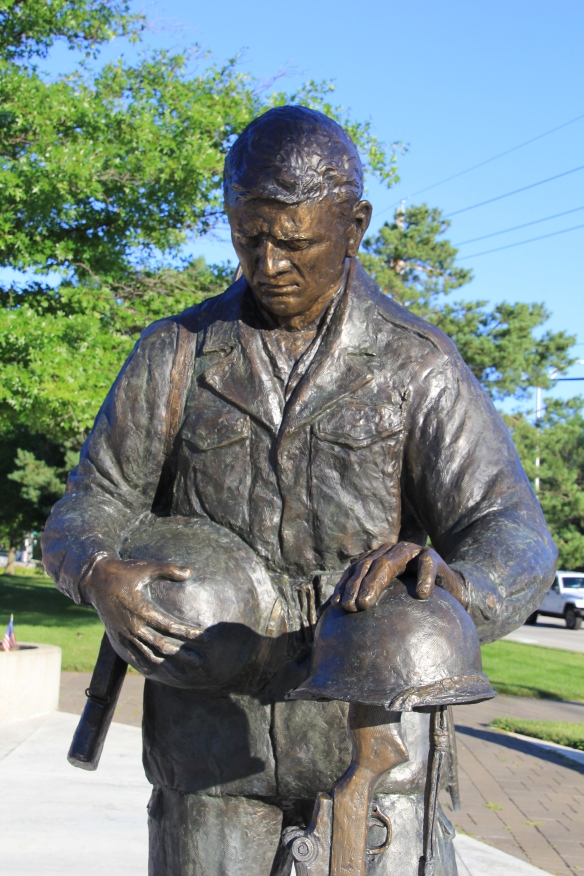 This is a bronze sculpture of an American soldier paying tribute to his fallen comrades after the Korean War which was waged from 1950 to 1953. It is often referred to as the Forgotten War because of the great conflict of WWII preceding it.  However, it was a bloody and difficult war resulting in an armistice rather than a mutual declaration to name the conflict as over. A demilitarized zone (DMZ) was created separating the north and the south from one another. It is the most heavily armed area in the world. As most know, this has been in the news of late as North and South Korea are attempting to put an official end to this debacle.

As with all wars, many civilians lost their lives in addition to the soldiers who sacrificed much. It saddens me that so many paid the ultimate price for a stalemate. At the same time, I am grateful for those who fought and sacrificed in behalf of freedom for half of the peninsula of Korea. Perhaps someday the north and south will unite as did Vietnam. The North is devoid of democracy and justice and the people live in a state of misery, ignorance and subjugation. My heart goes out to these citizens. 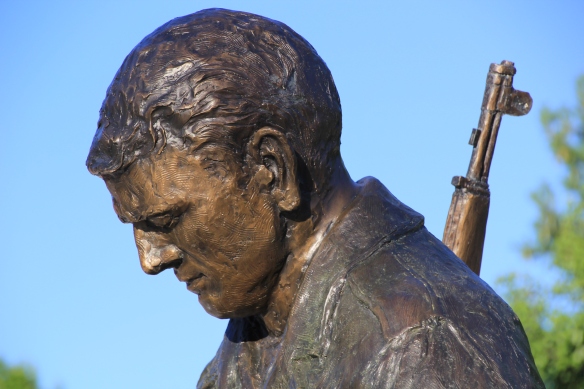 America is not a nation of innocence when it comes to military conflicts and of war. Blood is on our hands. I wish we were free from self-serving bloodshed such as what we caused upon our own Native Americans, African slaves and one another during our great Civil War. But, we have also sacrificed much to the betterment of all mankind by defending and promoting freedom whenever the call to arms was issued. Not all agree with each conflict. I certainly don’t, however, I support those whom answered the call to do what they think is right and for the furthering of democracy.

Man, regardless of nationality, is a self-serving being. I stand amazed at how some European nations remained neutral during the Nazi terror of WWII. In the Pacific theater of war all became enemies of a misguided empirical nation. I am grateful that my father and uncle, along with so many other young men and women from various countries gave themselves for this cause of freedom. Freedom for others and not always for their own peoples.

There is still much of the world in armed conflict. America’s best are still fighting and dying for freedom for others. Various nations are in extreme struggles just to keep their nation’s alive and safe. May we never forget those who sacrificed so much and are still doing so today. I encourage all to honor a vet or family member this weekend whether  he or she is abroad or on the home front. They are most deserving.  I am reminded that their sacrifices allow me to write this post and bask in freedom’s light. 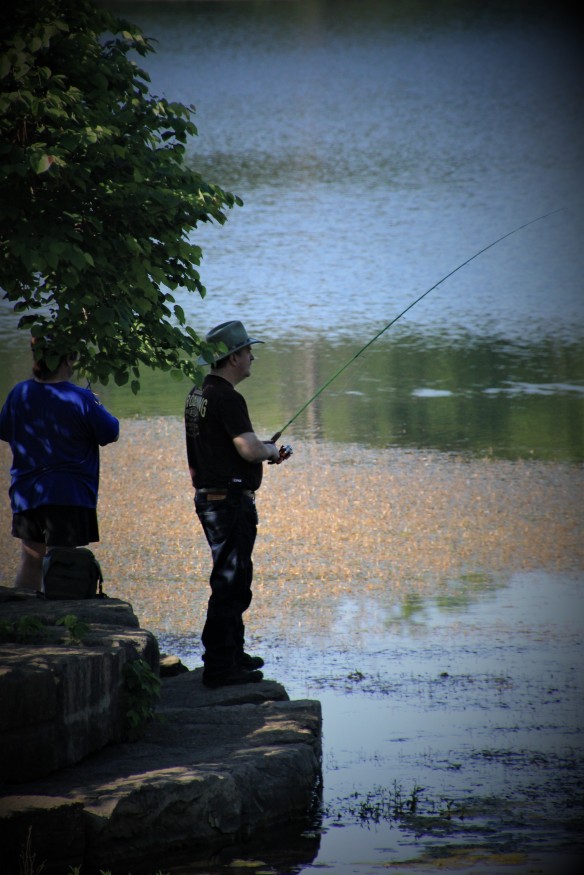 No, I am not referring to Bruce Springsteen, the legendary rock band leader. Nor, am I referring to a criminal mastermind or a particular public figure (many of these like this term as it applies to them). I have been called Boss when on construction sites, but I think this was more due to a worker’s name preference or lack of personal knowledge rather than my actions.

Bosses can be found in all sorts of arenas: the work place, at home, among friends, in most any kind of group, in sports, and the list goes on. Bosses can be inspiring or exasperating, kind or cruel. Some are brilliant and others just plain dumb. However, the Boss I am thinking about was neither dumb nor cruel…he was just furry. 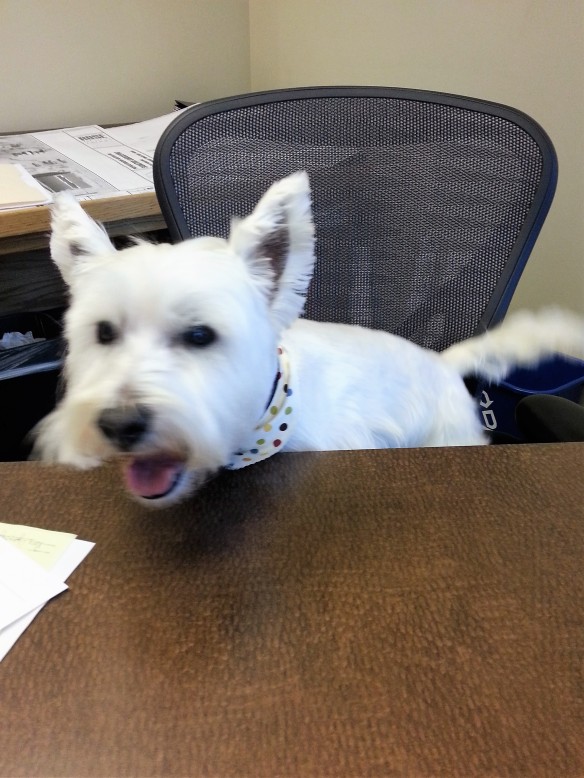 Here is Carson at the office. He is exhorting his team members to go out and get the job done right, on time and within budget. When Carson barked, people listened! 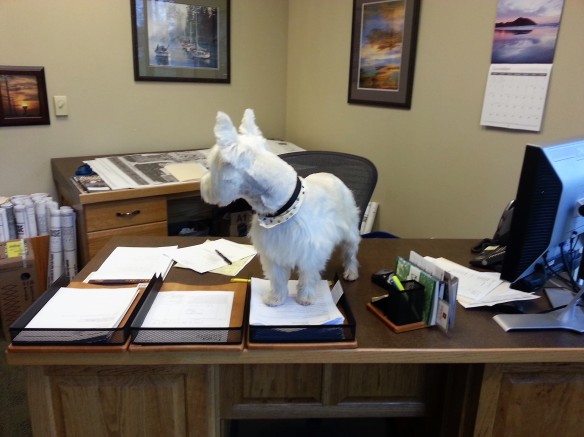 Here he is making a point by standing on his desk. He makes eye contact with each person to make sure he is understood, and to offer that little bit of encouragement we all need from time to time. I miss my old Boss, but won’t forget the lessons he taught me. More than that, I remember how his positive actions spoke louder than words. Did he always get things right? No, but in the words of Steve Miller, “He was righter, righter than wrong”. 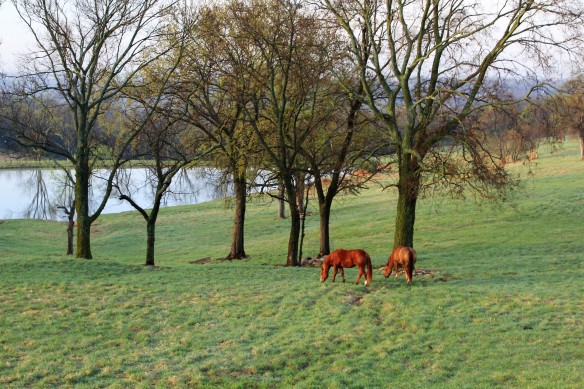 Serenity. What image comes to mind when you slow down enough to ponder this word? Serenity means many things: peaceful, idyllic, carefree, beautiful, tranquil, and much more. 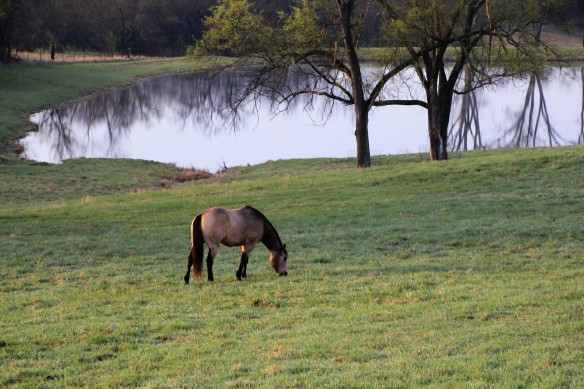 For some serenity may mean a leisurely Autumn walk in a wooded park or a relaxing day at the beach. Perhaps a particular moment in time where there wasn’t a care in the world or simply reading a book with a cup of coffee or cocoa by a fireplace.

Since I love nature so much and see these horses graze in their pasture most days, the word serene came to mind as I first noticed this scene. The horses are content, the pasture is turning green with Spring rains, the placid surface of the distant pond whispers clam-all made me feel at peace…even for a moment.

May you find your moment of serenity today and everyday. Your sanity may depend on it.