I would like to share a story with you. It is a story about life, and about a quest for answers. As a disclaimer, I have read more impressive and improbable stories that caused me to shake my head in utter amazement. This story is not so grand as that. However, it is a pleasant story which has several obvious and noteworthy events which could be construed as serendipity.

As you can discern from my blog page description, my mother was a war bride. She was born in Belgrade, Yugoslavia (Serbia’s capital). She had one parent who was Serbian and the other who was Croatian. My grandfather joined the Yugoslav army to fight the Nazi’s and was never heard of again. My grandmother died of a digestive disorder, perhaps cancer, during WWII. My mom had a sister, Milice, who stayed in Belgrade while my mom left home (after the Nazis occupied Belgrade) and wandered about Europe for nearly five years during the war. Her story is amazing in and of itself. Milice eventually married a good man named Tommy in 1963 and they lived in the same apartment for the next thirty-plus years until they both passed away. They did not have children. In 1980 my mom visited her sister and brother-in-law in Belgrade. Below is our photograph of them together. This is relevent to my story. Mom is second from left, next is Tommy, then Milice. The others are friends of the family. As a side-note, my sisters and I visited our aunt and uncle (with our mom) when we were children, but never saw them again. We never knew our maternal grandparents.

This story begins in May of 2013 when Cheryl and I vacationed in Croatia. Due to a missed flight connection we ended up being rerouted to another city with a five-hour layover before we arrived at our intended destination, the Split airport (if interested, I wrote about this in my first post about Croatia). It was midnight when we arrived and an hour later when we checked in at Le Meridian Hotel in Podstrana. Due to the late hour and exhaustion, we slept in later than anticipated. We were rather bummed because we wanted to eat a hearty breakfast after traveling for so long. However, our delay turned out to be a blessing. We had a late lunch on the veranda of our hotel which overlooks the Adriatic Sea. There were but a handful of people eating at 2:30 pm so we had a generous amount of time with our waiter, Ivan, from Omis. Ivan was wonderful, and was willing to discuss anything we asked, including politics and the aftermath of the 90s war. He was charming and most helpful, and was a very fine waiter. He is also a martial arts instructor and excels at both of his careers.

I mentioned to Ivan that my mom was from Belgrade and that my sister, Tracy, was going to tour much of the former Yugoslavia in early September, and that she was going to Belgrade to learn more about our aunt and uncle. To my surprise, Ivan has family in Belgrade, including a cousin that he offered to assist my sister, her husband and their companions when they arrived. As the date of my sister’s arrival grew closer, Ivan contacted his cousin, Marijan, who in turn interacted directly with Tracy. Upon their arrival in Belgrade at the end of August, Marijan was contacted and he offered to assist Tracy and Dale in locating the apartment building where our aunt and uncle lived for so long a period.

He took them to the building, but there was no Tommy or Milice. They died in 1993 and 1997, respectively. With little hope of gaining any new information, they almost left. However, Tracy noticed a woman hanging laundry in the courtyard of the complex and decided to visit with her. When Tracy approached Jelena she told my sister that she normally hangs her laundry on the roof, and didn’t know why she chose to hang it in it the courtyard that day. Tracy, with the help of Marijan, began to question Jelena about our aunt and uncle. She showed her the photograph, and to Tracy’s amazement Jelena knew the people in it. On top of that she identified the girl in the photo as her niece (husband’s side of the family). The woman next to my mom is Jelena’s mother-in-law. Her husband, Dan (not in the 1980 photo) remembered my mom’s visit, as he was about twelve years old at the time. Below is Jelena with Tracy and another photograph with Dan (Jelena’s husband) and Tracy.

As this encounter between not-so-old friends continued, a new revelation was revealed by Jelena. Milice’s best friend, and a friend of her family, Selena, is still alive and lives in an upper room of the same apartment complex. In fact, Selena opened her window to hear what was taking place and then came down to greet my sister, her husband and their friends, Mike and Pam. By the way, Mike took all the photos, except for Ivan’s.

Selena invited my sister and companions to her apartment for tea and conversation. She shared photographs, stories and details about Tommy and Milice. Below is Tracy, Selena and Pam inside Selena’s apartment which she has lived in for over forty years. 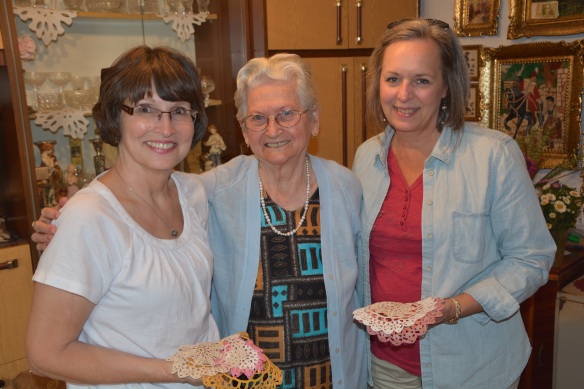 Selena told Marijan which cemetery our aunt and uncle were buried. He then took them to this famous cemetery where politicians, heroes, and dignitaries are interned. It took quite some time to find the location of the burial plot. Tommy and Milice were so poor they didn’t even have a headstone or an inscription on the concrete slab which was placed over their bodies. The cemetery employees were very helpful, as was Marijan who went above and beyond all expectations to assist my sister. 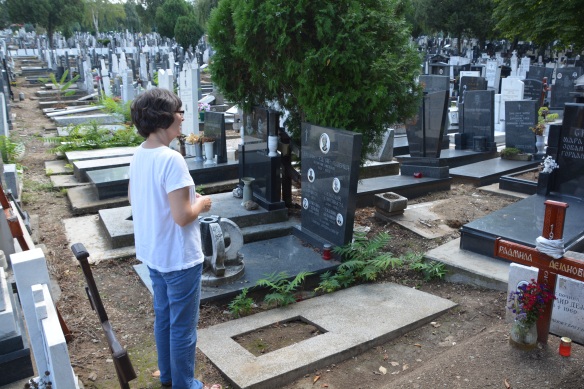 There are still many unanswered questions about our mom’s early years and her family, especially because the war disrupted so many lives and eliminated most records. So, to have located the graves of Tommy and Milice is rather spectacular. In fact, I find this whole affair to be remarkable. Please consider these points. What are the odds that Cheryl and I would miss a flight, be rerouted to Dubrovnik, have a five-hour layover, then go back to Split before arriving at the hotel after midnight? This type of thing happens regularly, however, without this delay we wouldn’t have met Ivan who we didn’t see again while at this hotel. What are the odds that Ivan had a cousin in Belgrade who would help my sister? What are the odds that they would encounter Jelena who was hanging her laundry in an unusual place at just the exact time my sister arrived? What are the odds that Dan’s daughter and mom were in the photograph from 1980? And, what are the odds that Selena was home, provided insightful information about our relatives and mom and was able to direct Marijan to the cemetery where our aunt and uncle are buried? There has been a six month period since Tracy had this experience which has given me time to reflect and consider the odds. The odds are pretty good if each instance stands alone. But, that is not the case as they are a combined set of circumstances that fit together to reveal one remarkable story. I simply cannot attribute this experience to chance, coincidence or luck. I believe that the Grand Conductor orchestrated this entire scenario. I believe each appointment was divinely directed by Him. So, the next logical question is why? To be totally honest I don’t know why He would do such a kind thing for my sisters, Valerie and Tracy, and for me. Certainly it is not because we deserved or earned this gift. Instead, I simply accept this to be the truth: a loving God saw fit to bestow a blessing, borne out of love, for some of His children. And for that I am most grateful, and humbled.