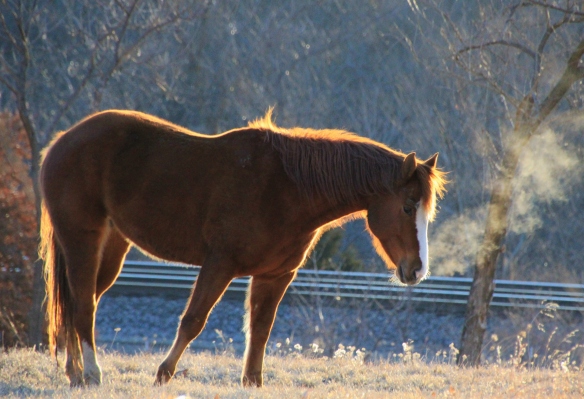 Saw a horse. Strong and handsome.

Braving the arctic blast that has swept over our area.

Within a couple days the temperature will rise forty-five degrees (F).

This inspiring animal will still be here. Warmer.

I am pleased. Hope you are, too. 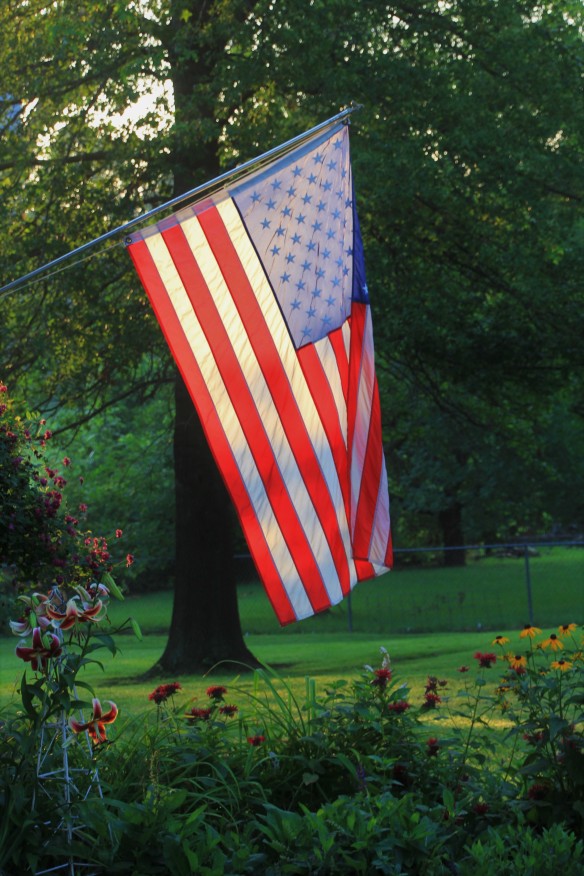 Four score and seven years ago our fathers brought forth on this continent, a new nation, conceived in Liberty, and dedicated to the proposition that all men are created equal.

Now we are engaged in a great civil war, testing whether that nation, or any nation so conceived and so dedicated, can long endure. We are met on a great battle-field of that war. We have come to dedicate a portion of that field, as a final resting place for those who here gave their lives that that nation might live. It is altogether fitting and proper that we should do this.

But, in a larger sense, we can not dedicate — we can not consecrate — we can not hallow — this ground. The brave men, living and dead, who struggled here, have consecrated it, far above our poor power to add or detract. The world will little note, nor long remember what we say here, but it can never forget what they did here. It is for us the living, rather, to be dedicated here to the unfinished work which they who fought here have thus far so nobly advanced. It is rather for us to be here dedicated to the great task remaining before us — that from these honored dead we take increased devotion to that cause for which they gave the last full measure of devotion — that we here highly resolve that these dead shall not have died in vain — that this nation, under God, shall have a new birth of freedom — and that government of the people, by the people, for the people, shall not perish from the earth.

Abraham Lincoln’s speech given on November 19, 1863 at Gettysburg to honor the dead of both the North and South of the great Civil war which eventually produced 600,000 deaths…far greater than any other war we have fought and died for.

I have felt an impulse to write sometime significant about this American Memorial Day. I recognize that many countries have their own version of a memorial day which allows them to ponder and honor the sacrifices of past and present soldiers, diplomats and brave citizens. I came across President Ronald Reagan’s famous speech which reignited a patriotic pride in Americans (given in 1986, and which addressed many conflicts including Vietnam). However, when I recalled Mr. Lincoln’s speech and was reminded of Martin Luther King’s, ” I Have a Dream” speech, I came to realize that these speeches can speak louder and more authoritative than any prose I could write. This brief summary is not about politics or right and wrong, nor even war itself. It is about those brave men and women in America, and throughout the world who have sacrificed their lives for the cause of freedom-either from an internal oppressor or and external oppressor…and continue to do so. Also, this is not a flag waving-in-your-face post about how great America is. We have many faults and a history of violence, yet we have always retained the good and decent things in life which have made America a beacon to others for so many years. May she ever remain so.

Blessings to all this Memorial Day.

Robins are, to the human eye, a simple yet wonderful bird. I assume the ornithologist would consider this common species rather pedestrian. To be sure, there are plainer looking birds, as well as spectacularly beautiful birds such as the Indigo Bunting, the Cardinal, the Bald Eagle and an entire group of tropical birds with tremendous colors and plumage.

There are species of aves with songs so pleasing to the ear that their ‘voices’ are recorded and played on nature CDs, songbird clocks and animated Disney films. Among the most pleasant sounding are the Orioles, Warblers, Tanagers and Finches.

Although the Robin is categorized as a songbird, it doesn’t make the top ten list of most beautiful singers.

Even the daily life and habits of the Robin don’t create any particular awe. They show up in spring, build nests, lay and hatch eggs, raise their young, forage all summer and fall, and then leave our area for a warmer climate during the winter months. This is relatively common behavior for a pretty common bird.

For a point of reference, I am a middle aged guy who lives in the suburbs of Kansas City. I have always lived in the suburbs. I have always been near Robins. They are a part of my collective life experience. In a sense, I have a bond with this creature. Something would be missing without this feathered friend showing up year after year- without fail. The same holds true of grey squirrels, rabbits, grass hoppers and butterflies; all which inhabit this part of the country.

Although I am not a bird expert, my appreciation for this orange-breasted, grey-feathered friend is based on a lifetime of observation and familiarity. As I have aged I have become increasingly aware of my natural surroundings, especially the living things. I have regained the childlike fascination of nature, and have become more cognizant of the precarious balance of life all around me. The qualities which endure me to these wonderful birds are as follows.

At the top of my list of reasons for Robin appreciation lies in  their commonness; their average appearance, song and behavior. Odd, but they don’t seem to do anything extraordinary! They exist and repeat the programmed patterns of their lives year after year. Of course, all of nature does this so there is a sense of assurance in watching the same behavior over and over again. And, Robins are plentiful in this section of the U.S. so there is never an absence of seeing them on a daily basis. Funny, but I don’t tire of them. I awaken to their song, and hear them tweet their last sounds each night as the sun sets.

Robins are hardy. They are among the last birds to leave the area before winter’s cold engulfs our region. They are usually the first to arrive in early spring when the temperatures fall below freezing. Due to an unusually warm winter this year, I witnessed the first group of Robins in my yard in mid-February; a month earlier than usual. There is certain toughness about this bird. She doesn’t fly off to warmer destinations at the first blast of arctic air, neither does she return when the temperature has been steadily warm. Show up early and leave late; that’s the Robin’s M.O..

Robins are happy birds! They are the first to greet each morning with chirps of joy while hunting for worms and grubs. In fact, they will awaken you before the crack of dawn if windows are open. Their voice creates a happy noise, full of optimism and contentment. As spring melds into summer, the Robins greeting remains steady and certain. They are a delight to watch as they hop and scurry about before taking to the trees.

As with most birds, spring is an especially active season as they mate and then go about the task of building their nests. Although I wouldn’t consider the Robin’s nest to be an engineering marvel, I do view their homes as strong and dependable structures, built in all manner of locations, and with a tenacity that equals that of a combat marine or fighter in the ring. They will not be deterred even if their nest is blown out of a tree. They quickly and efficiently build a second nest just in time for egg laying.

From the day the eggs are laid until the chicks emerge from their shells is typically fourteen days. I, along with my family, have had the privilege of watching the parents build the nest on a light fixture two feet from our glass door to our deck. We witnessed the three blue eggs appear, and then evolve until the day each chick hatched and began the ritual of groping for food. Mom and dad participate in the nest building process, warming of the eggs, feeding the babies, and the eventual coaxing of the healthy chicks from the nest. Proud parents they are, and very protective of their helpless fledglings. Our dogs enjoyed these special moments, but from inside the house-much to their chagrin! Another plus is the fact that Robins clean-up after themselves. Most birds leave their droppings all over the place, but adults during the nesting period actually clean the nest and surrounding area everyday.

Robins are a communal bird. They flock together to eat and rest in pairs, as well as in groups. They are generally non-aggressive, unless protecting their young or community. During times of testing they hold their ground against more aggressive species such as Blue Jays and Mockingbirds. Robins have adapted quite comfortably to people and pets, and will stay on the ground until a person approaches within a few feet…with pets they bolt a bit sooner! Fearless may not be the correct adjective, but Robins are not timid birds.

Hardy, cheerful, industrious, brave, cooperative, and charismatic is my friend, the Robin. A world without them would be like a bit of sunshine disappearing. I can’t imagine that. How wonderful it would be if we all would emulate this simple, yet astounding creature. I believe our world would be a much better place.