With a powerful thrust of energy, this red-tailed hawk stretches out her wings to take flight. She sees her mate about a hundred yards away in another grove of trees and goes to join him. Rather romantic, isn’t it! After taking turns guarding their nest, it’s time to hunt for today’s meal. We have an abundance of these hawks throughout the Midwest United States. They can be seen in groups circling high and low in the sky in search of prey or mates (depending on the time of year).

They are a graceful predatory bird and a fierce defender of their nests. These hawks usually mate for life and can live up to thirty years. They have adapted well to human habitat and are often seen sitting atop descriptive road signs only a few yards from the highway’s speeding traffic. One can see why birds have been used as models for airplane designs as they were created to ride the wind most efficiently. I especially like it when they catch thermal uplifts and glide without effort for what seems like hours.

As a photographer, one has to be ready at a moment’s instance to capture something strikingly beautiful or unusual…or, in this case, something that is an everyday occurrence, but most never witness. In a nut shell, photographers are opportunists. With this in mind, I present a bird of prey that was an opportunist on Saturday morning. While at Loose Park, one of Kansas City’s jewels, Cheryl and I strolled through the rose garden. It is still a bit early for roses, but something else caught our eyes and lenses. A red-tailed hawk catching his breakfast! I must apologize for the blur in these photos due to being startled by what was taking place, but I wanted to share them anyway simply because nature is so awesome. It happened so fast that the entire episode lasted mere seconds. The eating of the prey took all of five minutes. All photos are unedited.

The prey was spotted and the predator took off….

Bringing back his reward… 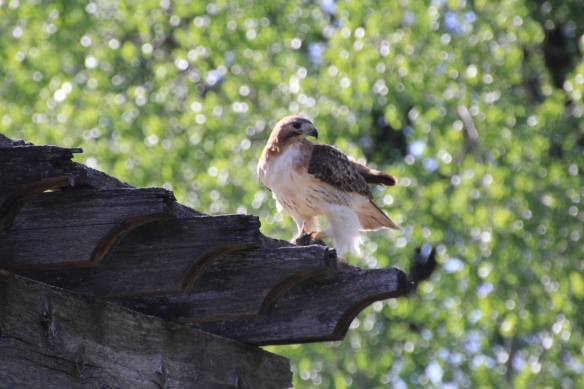 And, preparing to dine on the same perch he catapulted from only a few seconds ago. Some call this dynamic the circle of life. Perhaps it is…life for some and death for others. It is the way of this world we live in. One day, there will be no more death. What a glorious time that will be!