Have you ever been to extreme places in your travels? Places known for the unusual or almost unbelievable quality that the specific location revealed? Well, our second stop was to the Bay of Fundy which is situated between the east coast of New Brunswick and the west coast of Nova Scotia, Canada. Due to the geographic nature of this particular bay, it boasts at certain locations the greatest tide differential on our planet. On the way to the north end of the bay we stopped to take in the coastline scenery.

We drove through a hidden gem of a nature park called the Fundy Trail. It has scenic lookouts, waterfalls, secluded beaches, crazy steep and curved roads, hiking and bicycle trails, a swinging bridge and an informative nature center. Everything written is in English and French. This area has a rich history of logging and large ship building.

One of our goals was to visit the Hopewell Rocks at the north end of the bay. This is where the tide changes heights on an epic scale. While we were there, we witnessed the tide drop 37.5 feet in a matter of hours! We walked the ocean floor and stared at sandstone monoliths with pine trees as top hats. Crazy stuff to be sure. When conditions are just right, the tide can actually change fifty feet. For some really fascinating information about tides, I direct you to the following website (yes,I admit that I plagiarized when I named this post): http://www.moonconnection.com/tides.phtml.

This image shows the tide already receding ( we missed shooting high tide). The water turns a brownish-red color during low tides as sandstone sediment is churned up as the water is drawn out. 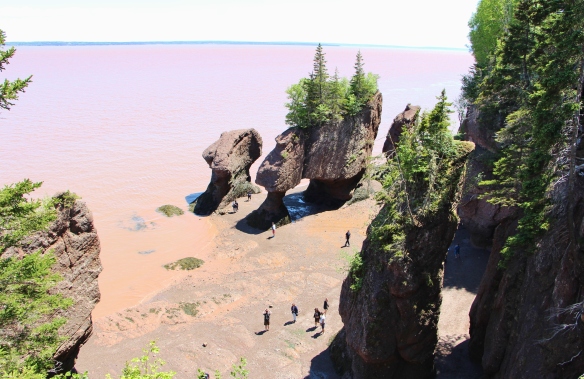 This image is about two hours shy of low tide, but gives you an idea of the differential in tide variance. Please excuse the image quality as it was very bright out and the area was rather dull looking. Notice the size of the people in comparison to the rocks. 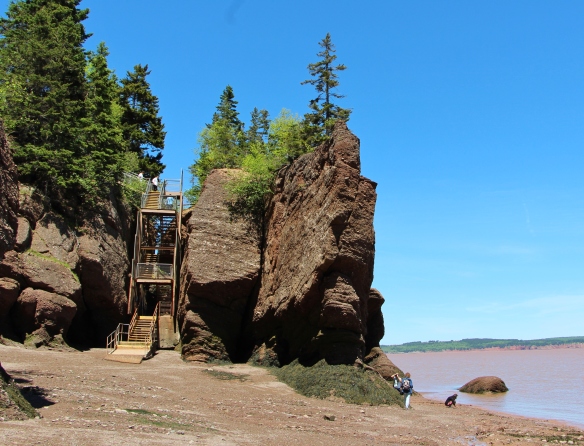 Below are a couple photos to prove that we actually walked on the ocean floor! 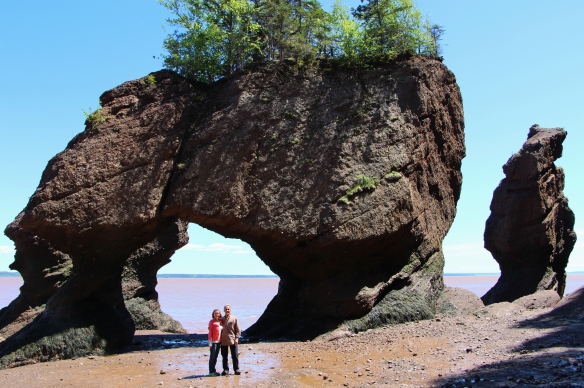 Farther down the coast where the cliffs subside and beaches take over, the low tides would draw the ocean water approx. 400 ft. away from land.