While in Puerto Vallarta, we participated in one of the most wonderful, worthwhile and fun Eco-system projects imaginable…the releasing of Olive ridley sea turtles!

Cute, isn’t he (or she)? In brief detail, here is what takes place. For months prior to December the females come ashore to bury their eggs (called clutches) and then return to the ocean. A clutch can have anywhere from fifty to two hundred eggs. Average is around 125 eggs per clutch. The Olive ridley is listed as vulnerable whereas it’s cousin the Kemp ridley (Atlantic ocean turtle) is on the endangered list. Both turtles lay their eggs in the same beaches where they were born…some 13 years after birth. Isn’t God’s design grand?! 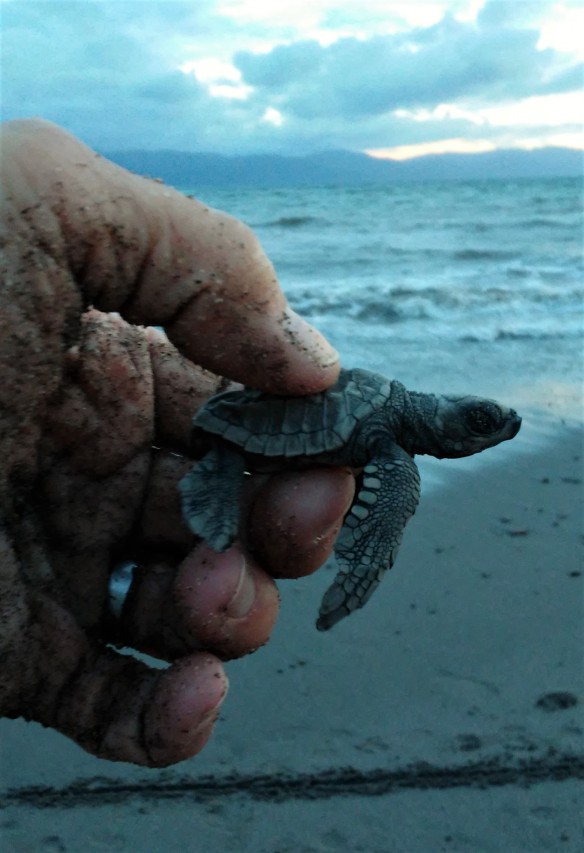 Biologists comb the beaches at night (when most mothers come ashore) and find the clutch hole covered with sand. The biologist then digs up the eggs and places them in a container and reburies them in a secured fenced area set aside for this purpose. Each clutch of eggs has a marker telling the date found, quantity and expected date to hatch (average is 45 days). The enclosed area looks like a cemetery with rows of markers. But instead of death, there will be life. We stayed at a Marriott hotel which has been participating in this effort for fifteen years. In fact, all across the globe, Marriott does similar rescues where endangered species abound.

In America, only trained biologists can let the turtles go. They quarantine the nest and monitor it until the turtles hatch, and then they secure the path to the sea. Padre Island is one of the most highly populated areas for sea turtle eggs. Perhaps that is why in the USA the turtles on the Atlantic side are secured because they are endangered. I don’t know about the procedure along the Pacific beaches in America. Regardless, to hold one or two of these little guys in your hands and then let them and race (slowly) to the ocean is spell-binding. We are told only 2% of all sea turtles make it to adulthood which is at least ten years old. Some can live up to one hundred years. An average adult sea turtle can lay from one to three clutches per year. Times that by hundreds of thousands and the 2% doesn’t seem so minimal. Nevertheless, with man and nature vying for the same territory, endangerment is always a possibility. We are so grateful to Marriott for this program and for Mexico allowing anyone to participate. FYI-the sandy hands are a requirement. Before anyone can handle  one of these little guys, they must scrub their hands with wet sand to eliminate any type of lotion or foreign substance from their hands.

How many do you think are in this large container?