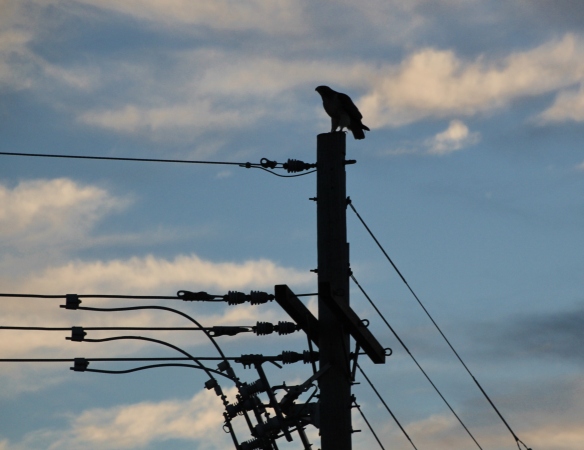 I wonder how many hours and days it has taken this hawk to learn the art of graceful flight. To land atop a pole which provides the best vantage point for searching out prey is instinctive behavior. But, to land correctly, balance in the wind, and turn this way and that takes practice. And, practice takes time.

I wonder what the reason was for this bird of prey to suddenly stand erect, then tilt forward in preparation for flight? Did he see something he wanted or did he not see the prize and decided to move to another location which offered a better view? Or, did he simply become bored? Do birds get bored, anyway? Do they think or merely act as a result of their genetic code? One fact we know is they have great eyesight and lightning fast reflexes.

I wonder if the hawk’s decision to vault off the pole arose purely from instinct or was it a conscious decision? Like a sprinter leaving the starting blocks in a race so this predator leaped from his perch-wings fully outstretched-to swoop down and then rise up again to his next destination. Is there something going on besides the obvious? Nature moves in rhythm: the moon waxes and wanes, the tides go in and out, the sun rises and sets…constantly repeating the same cycles over and over again. I have noticed most, if not all, created life has cyclical aspects to it. Animals do. Birds and fish and insects do. Plants and trees do. And, people do. In many ways we are no different than the rest of God’s creation. However, there is something that sets us apart-something wonderful. It is more than just our souls, because all of God’s creatures must have some sort of soul (at least animals!), although they differ from mans’. We were created in God’s image while the animal kingdom was a created entity which was to be cared for by people. To me, the wondrous difference is that we have been given the ability to enjoy a personal relationship with our Creator! Shaky theology, you say? Perhaps. One day I will know for sure, and hopefully you will, too. In the meantime, I will try to keep my spirit flying as high as I possibly can. I do admit there are times when this can be very difficult. I think wings would help…a lot.