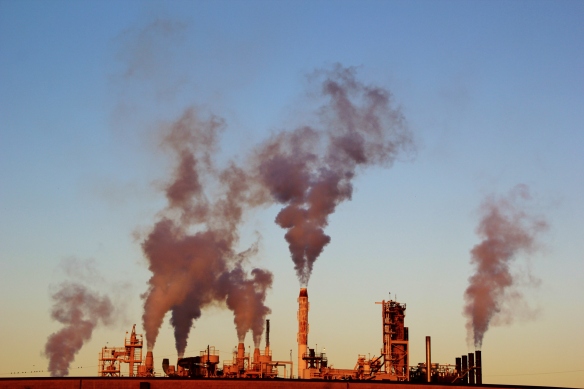 On a recent chilly morning I witnessed the release of steam mixed with smoke bellowing out of various manufacturing buildings. The sun was wakening and revealed herself in a blanket of light which illuminated the buildings, stacks and the fast-moving, vertical clouds in marvelous ways. Smoke stacks are created to carry away the by-products of various manufacturing operations. These stacks are in the same lower industrial district called Fairfax, in Kansas City, Kansas. This is the same area where I photographed the starlings on wires. Interestingly, during WWII, much of this area-including the old General Motors automobile plant-was transformed into a mighty war machine, producing everything from bombers to nuts and bolts. There was even an aircraft strip made for the bombers to depart from their plant. It is long gone. I can envision a Thomas Hart Benton painting as America flexed her industrial might which transformed her into an industrial giant in the twentieth century. Instead of products for war being fabricated, domestic products such as fiberglass insulation, electric motors and new automobiles are currently produced in this area. 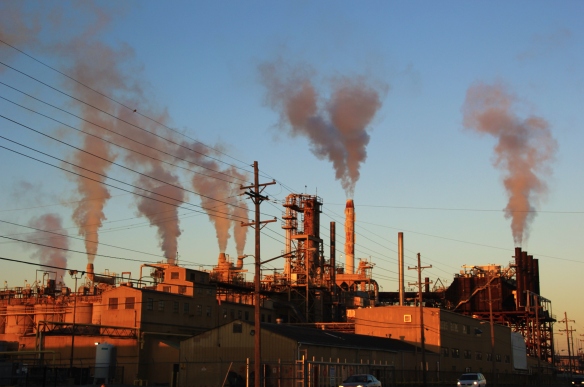 I don’t like pollution, but I understand there is a certain amount of it pouring out of these stacks as materials are mixed and burned, etc. I’m sure there are processes in place to scrub the pollutants out of the by-product that we call smoke. In the case of these photographs, much of what appears to be smoke is actually steam which is readily visible due to the moisture in the air and the sunlight reflecting off the steam and smoke. Most of my photographs are of nature because I am so drawn to God’s creation, but I still find beauty in other things, including smoke and steam clouds !

As I drove around the area my angle of attack shifted from the east looking west to the west looking east, into the sun. This perspective provides a more etherial quality to the images as the smoke and steam are semi-translucent. A few minutes after these photos were taken the sun leaped above the horizon and I was on my way to another project. I hope you find these images interesting, and perhaps a bit mystifying, too. Thanks for viewing my post today!