Paul Simon wrote this song and sang it with his partner, Garfunkle, in 1972. Many theories have been postulated about its meaning and mere guesses abound. This is what we know from Paul…

He was eating at a Chinese restaurant and saw a dish on the menu called “Mother & Child Reunion” which was comprised of chicken and eggs. He liked the name so much he chose to use it on a song at some point. 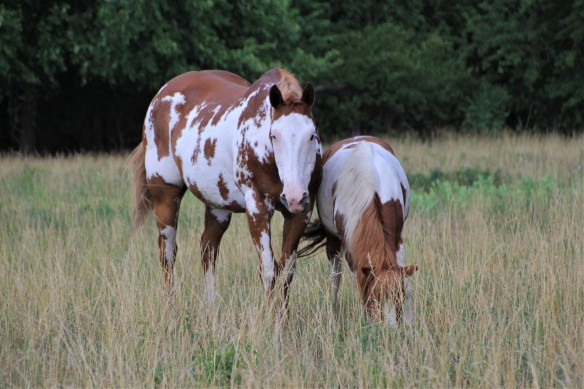 Later, he had a beloved dog who was run over and died. This had a profound impact upon him. As he thought about this incident and thinking about his wife Peggy, he came up with these lyrics. Even he can’t explain it that well- it just came together, he said.

Aren’t these Palomino Painted horses beautiful ? Mother and daughter always together in a nearby field. It does my heart good whenever I see them. I’m glad I had my Canon with me last week. The song just came to me a few minutes ago, and I didn’t even have Chinese food at the time !