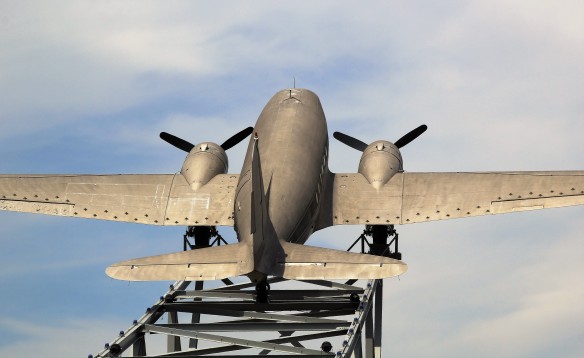 Should you live in or visit Kansas City, a must see venue is The Roasterie, a Kansas City coffee factory with a great retail coffee shop. The company’s symbol is a DC-3 airliner which symbolizes the unique air-roasting of their coffee, the best delivery system possible, and their worldwide supply network. The owner purchased this DC-3 and had it mounted above his coffee facility at 27th & SW Boulevard.

More about the iconic DC-3, though. Douglas Aircraft began design on the transport in 1934 and the first commercial airplane was delivered to American Airlines in 1936. At that time two options were available: a fourteen person sleeper and a twenty-one seat version.  Within a few years more than thirty airlines ordered and flew this aircraft. By 1939 more than 90% of airline passengers were flying on DC-2s or DC-3s. Additionally, there were 455 commercial transports built and 10,174 transports were produced for the military during WWII.

The aircraft was tough, flexible, easy to fly and is the stuff of legends. Needless to say, this bird brought a major change to the airline industry and her affect is still felt around the world. She is a graceful bird to view. There are still many flying today…six decades after the first one became commercially available!

Relax outdoors with a fresh cup of coffee, and make sure you look up the next time you hear the sound of a twin engine plane crossing the sky…it may just be a DC-3.